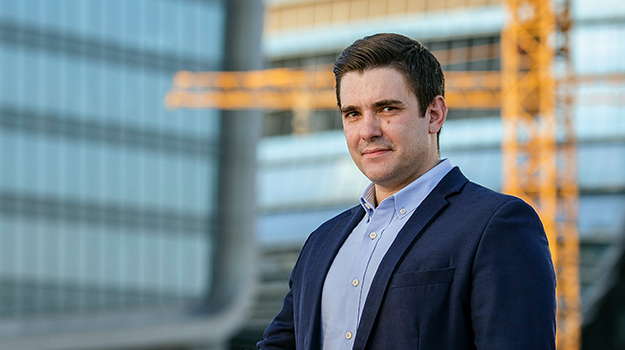 Country Manager at Knight Frank Cambodia, Phnom Penh, Ross Wheble MRICS started out in stocks, but ended up in surveying after a leap of faith from the UK to work in Malaysia. Ross tells us more in his own words.

I grew up in Kent, and after studying business and marketing at Canterbury Christ Church University in 1999, my first job was as a stockbroker in London, but I just wasn’t passionate about stocks. Instead, I took a leap into real estate. In 2005, I began working in residential agency at Elizabeth Pryce, and a year later as an acquisitions surveyor at Danriss Group, which sponsored my master’s in property valuation and law at the Cass Business School. It was an RICS-accredited degree, so I could start the APC process straight away.

I felt I needed more experience in the public sector, so I continued the APC while working as an asset manager for Southend Borough Council. After qualifying, I was eager to move back into the private sector, but in 2010 the industry in the UK was still suffering from the effects of the Global Financial Crisis. Weighing up my options, I was browsing RICS Recruit one day, and saw a position on offer in Malaysia. I went for it, and three months later I moved out to work for Jones Lang Wootton. In 2013, I had a chance meeting with the Managing Director of Knight Frank Malaysia, who offered me an enormous role to lead the firm’s growing operation in Cambodia.

We have a relatively small team, so you could say that my current role is similar to a traditional general practice surveyor. My main focus is on business development and client relationship management, and with the rapid pace of growth in Cambodia right now, we’re working on some very exciting projects. We’ve just completed a feasibility study for a "motorsport city" complex on the outskirts of Phnom Penh, and this year we’ll be launching a mixed-use development in the coastal city of Sihanoukville, which will include a five-star hotel.

There are some big challenges in Cambodia — in particular the lack of infrastructure and market transparency, which makes it more difficult to attract foreign direct investment. Nevertheless, there is huge potential here in infrastructure development, agriculture, hospitality, commercial, industrial and residential, which is why I’m excited about staying here for the foreseeable future.